Early Polling Data Has No Value

Political polls are presented to the public as a regular snapshot of how Canadians are considering voting if an election were held today. This is then analysed as a value judgement for or against the political parties polled. So for instance, if the Conservatives are polling lower than usual, then media pundits will talk about the trouble that the Conservatives find themselves in and search for a reason as to why this might be the case. They postulate about voter concerns and missteps regarding whatever news of the day may be happening. The pollsters themselves often make a point of reminding everyone that a poll is not a prediction, but simply a real-time picture of how people are currently feeling about politics. This allows them to provide information without being accountable for any conclusions. Polls then function as a both a measurement of political success and horserace entertainment for political media shows and articles.

The critics of the polls usually point to methodology or bias regarding mistakes in reading public intentions. Donald Trump was not expected to win the 2016 election and people around the world felt confident in the polls, right up until election night!

The purpose of this article isn’t to make the case that polling companies are ineffective or incorrect or biased in anyway. I believe the polls are usually correct given the information gathered. The real problem with political polls as a mechanism for understanding the trajectory and value of politics is that the inputs of information, ie., the potential voter, have very little value until roughly two weeks before an election takes place.

Why don’t they have value?

The average Canadian voter doesn’t wake up to the fact that politics is even happening until two weeks before an election. Everything in-between elections is just a wash of half-baked impressions and deliberate ignorance. When people are polled years out from an election about their thoughts and opinions regarding politics, they simply don’t know what to say. The people who do know what to say are in the minority and are usually partisan. This makes pre-election polling useless to everyone other than the media entertainment industry. 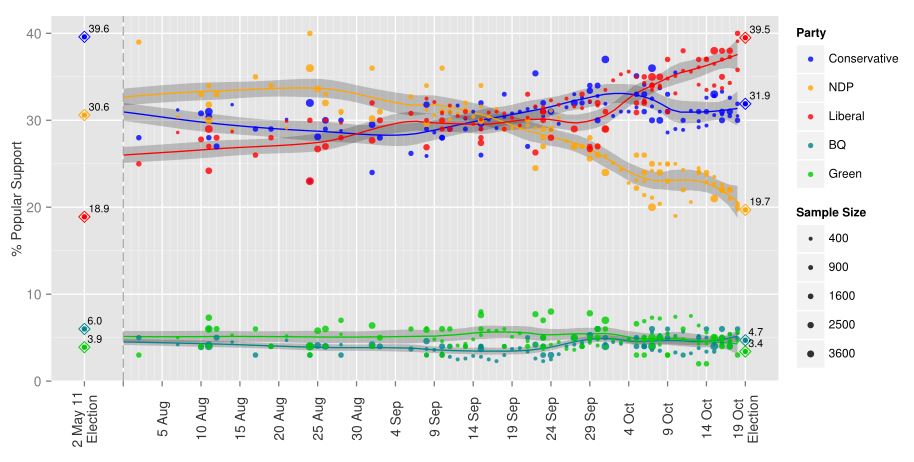 For a long time the NDP were supposed to win the election of 2015. June, July, August and into September the NDP were leading in the polls. Then you can see around September 14 is when the polls radically began to shift. This was precisely the period in which the first of the major leadership debates began to happen. (There was one on August 6, but I don’t think anyone watched it... they were enjoying summer.)

So suddenly the leadership debates happened and there was only one month until the vote and what happened? Massive swings thereafter.

Because people for the first time in years couldn’t avoid politics due to the arrival of an election. When they watched the news or checked their Facebook feed or turned on their radio in the car, they were forcibly subjected to politics. This is when people were likely surprised to learn that Jack Layton was no longer the leader of the NDP. This is likely when people were first informed that Justin Trudeau was the new leader of the Liberal Party. This is likely when people decided that Harper was looking too old and tired and they never really liked him anyway. 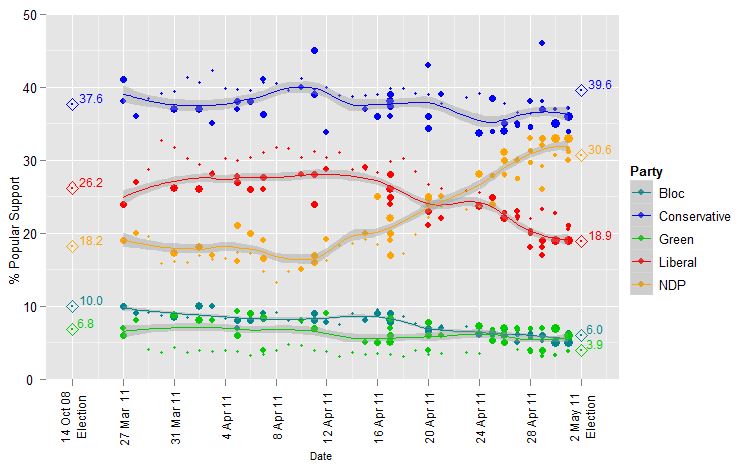 Above is an example from 2011. As you can see, the polls at the beginning of the 2011 election were almost exactly in the same spot as the end of the 2008 election (below). This was in the era of constant minority governments and it had been three years since the last election. So basically nothing changed in voter preference for three years. Then two weeks before the election, Jack Layton’s NDP surged and Ignatieff’s Liberals plummeted.

On April 12 there was a leaders debate and Jack Layton criticised Ignatieff for not being present in Parliament more often. Layton said, "You know, most Canadians, if they don't show up for work, they don't get a promotion."

This was a nice zinger and it made the media rounds. It was around this time that people woke up to the fact that an election was on and these were the choices. After that debate and about two weeks before the election the polls swung wildly as normal apolitical people made up their minds. 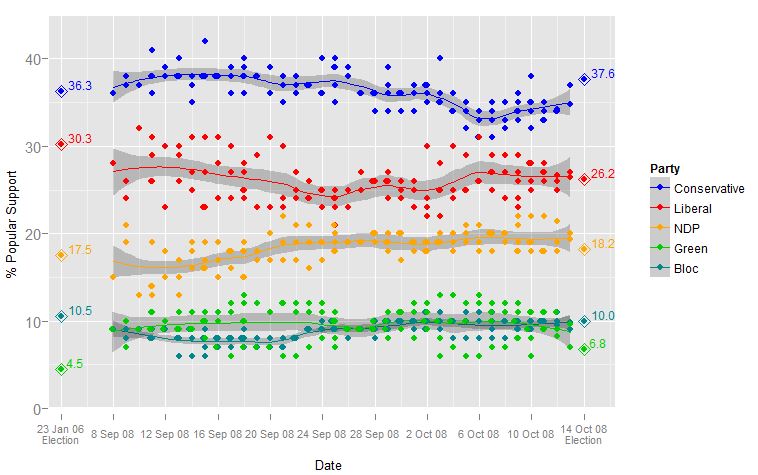 The election of 2008 probably should have been Harper’s first majority. Not much really changed in terms of polls since the previous election in 2006. The Conservatives went up a little bit, while the Liberals went down. The NDP performed almost statistically the same.

It was a boring election and nobody cared. It had the lowest voter turnout in Canadian history at 58%. The average apolitical, disengaged, uninformed voter couldn’t be bothered to participate even despite the election coverage and as a result it was essentially a partisan repeat of 2006.

The choice was made two weeks before the vote... and people didn’t wake up. 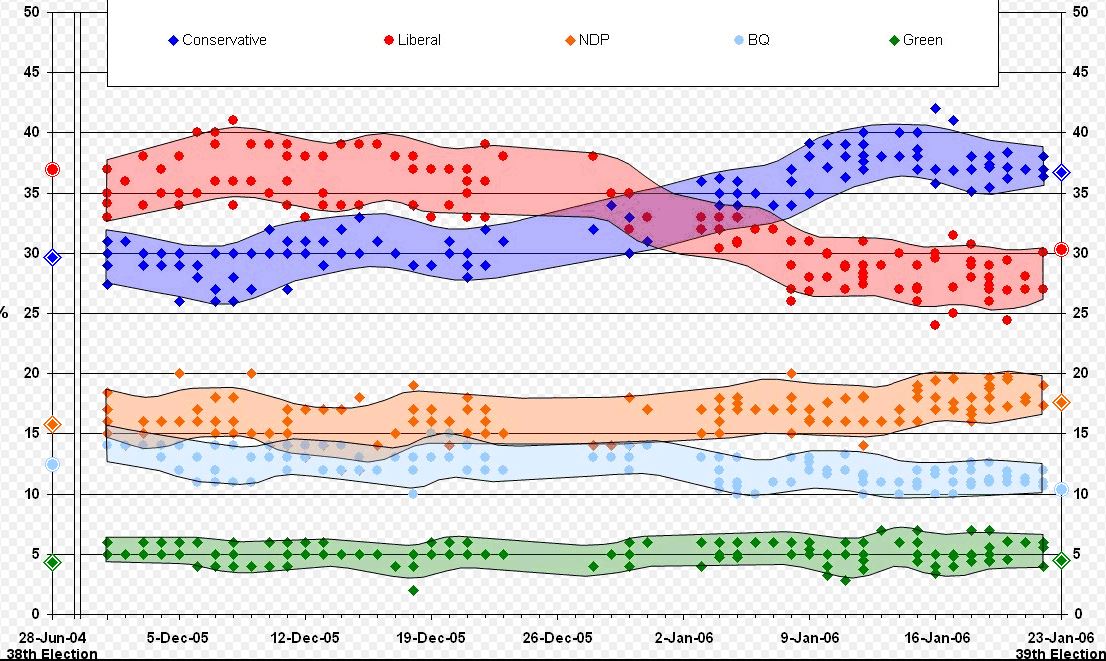 The election of 2006 was a winter affair. As you can see, the polls at the beginning of this election were almost identical to the polls at the start of this campaign. It wasn’t until after the new year that the polls radically changed.

Because people were finished with the Christmas and New Year’s holidays and woke up to the fact that there was an election happening in two weeks. It was only then that they paid attention and made their decision.

"Polling is merely an instrument for gauging public opinion. When a president or any other leader pays attention to poll results, he is, in effect, paying attention to the views of the people. Any other interpretation is nonsense." ~ George Gallup

The problem with the above quote is that people don’t have views on things they don’t care about or pay attention to. When asked, they make stuff up off the top of their head. They don’t want to appear uninformed or disengaged, because they understand that there is a value judgement about their level of sophistication or intelligence when assessing their opinion regarding political matters. There is a sense of social duty to have civic engagement within a democracy and people would be stigmatized for admitting the truth. What is the truth?

Pundits and party staffers and editorialists and campaign managers and educators and political junkies of the sorts that read articles like this need to drop the facade and romance of democracy and wake up to the reality of how our country is governed. It’s governed on the whims of a fickle and ignorant electorate that make superficial decisions a couple of weeks before an election every four years or so. There are no insights to be had. There is no analysis to explain. Voters are checked out until they are forced to check in and, when they do check in, they do so with all the effort of someone who's vote is essentially worthless (because it is).

When people analyse the upcoming election in 2019 and chase around every little bit of political fodder like dogs chasing tennis balls, remember that this is Canada and normal folks out there don’t care. When the election starts next year, it won’t surprise me to see the campaign begin with the Liberals at roughly 38% and the Conservatives at roughly 31% and the NDP at roughly 19% just like we left off in 2015.

Until October 1, 2019, we won’t know what the final picture will look like because only by then will people be waking up to the fact that an election is happening and they have to pretend to care for one day. Until then, don’t take the day-to-day political polls too seriously... nobody else does.