One needs not look further than the CBC to see what the Liberal agenda will be for the 2019 federal election. Gender politics, gun control and Trumpism will be the main talking points used against Conservatives in the next election, so we can more than definitely count on a dirty, filthy campaign instigated by Gerald Butts and his delightfully dim sidekick, Justin Trudeau.

Divisive rhetoric, comparisons to Donald Trump and accusations of racism and gun nuttery will be what Andrew Scheer and Conservatives face next fall. Trudeau's promise of sunny ways will be littered with the usual mischaracterizations of conservative ideas, exaggerations of truth and ever so subtle mud-slinging with the usual sprinkling of Liberal politicking—which always includes an endless stream of empty platitudes and Liberal fun words. Make no mistake about it, my friends, the 2019 federal election will be the most divisive and dirty election we have seen in decades, but the CBC will tell us that it is all because of the racist, alt-right Conservative Party and its Americanized band of Trumpian lunatics.

Gun control was on the Liberal radar long before last month's mass shooting in Toronto. Cases of mass gun violence from the United States have been used to write stronger legislations to regulate guns in Canada, but the latest shooting carried out by Faisal Hussain was ripe for Liberal politicization just hours after it happened.

As statistics Canada reports a rising crime rate and a growing epidemic of violence in the country, Liberals will want desperately to distract from their own hapless policies. Since the Liberals took their sunny ways to Ottawa, Canada's crime rate has soared under higher taxes, higher interest rates, higher inflation, higher energy costs and a stale job market. It is no wonder crime and violence have been on the upswing since early 2016. Fewer Canadians are able to make ends meet and more have likely turned to drugs, alcohol and crime.

A recent report by Bloomberg suggests that 28% of Canadians now fear bankruptcy under rising interest rates and living costs. This number is unprecedented and reflects a looming crisis that not only has Canadians losing sleep at night, but that very well could plunge them into the abyss of poverty and financial ruin. It would be foolish to think a reality like this would not take a psychological toll on Canadians and their families.

Justin Trudeau's economic management of Canada has put more Canadians into a state of anxiety and hardship. Crime rates will continue to rise as more and more Canadians see their futures turn bleak, but Liberals will continue to blame guns. Leading into 2019, we should expect Gerald Butts and his sock puppet to call Conservative policies dangerous, while whipping up hysteria about how many children would die underneath a dreadful Conservative majority.

Here are some headlines from our beloved CBC to help us believe we need more Liberal gun policies:

Gun Violence In Sask Up By 47%: StatsCan

Islamic Terror Is Not Real

The bizarre cover-up and brazen propaganda put out by our beloved state broadcaster following the Danforth shooting in Toronto was shameful and inappropriate in ways that would make the architects of Soviet era pravda blush.

The identity of the shooter, Faisal Hussain, was withheld unusually long, only to be released to the press in time for the CBC to publish a statement from Hussain's family that described him as a victim of mental illness and anguish. It was later revealed that a Muslim activist known as Mohammed Hashim was the author of the statement—not the family.

The CBC's attempts to mask Hussain's terrorist inspirations went further, when it was revealed by CBS (not CBC) that Faisal Hussain had been visiting ISIS websites and may have made efforts to contact members of the radical terrorist group prior to his rampage. Further, it was revealed that he had been known to police and that a raid was conducted on his home.

Of course, we would not have known any of this had it not been for investigative journalists... in the United States!

The Liberal agenda for 2019 will deny the existence of Islamic terrorism, which will help squelch outrage over the expanding crisis at Canada's borders—in which “refugees” from the United States seek asylum in Canada.

As far as Liberals and your beloved CBC are concerned, terrorism is not a thing. All obvious acts of terror will be played off as mental illness—written by Muslim spin-doctors and activists named Mohammed. All throughout the 2019 election campaign, terrorists and terrorist sympathizers will be victims of mental illness and hardship... perhaps the economic hardships created by Liberals, as noted above?

Never! Do not count on it, my friends.

Like clockwork, we should expect Gerald Butts and his friends at the CBC to accuse Andrew Scheer of Trump-like politicking and hatred. Being the least Trump-like of any politico in Canada, Scheer is one of Canada's most charming and disarming conservatives. If we were to compare apples and apples, Gerald Butts and his divisive, gender and race baiting sidekick are more Trumpian than Scheer could even imagine.

Trump this, Trump that—expect to hear America's president being thrown around like the worst insult of the Century as Liberals try to smear Conservatives with tired, baseless verbiage.

None of it will be true, but if Trudeau or Butts say it, expect the CBC to mirror it and report it like fact. Trump is racist, therefore, Scheer is racist... forget the facts, the CBC won't need those. Comparisons will be made between Scheer and Trump that won't make sense to any sane Canadian, but they will be repeated and sold until they stick.

No matter the fiction, expect Liberals and the CBC to sell it as fact.

We should expect Trudeau and his gang of merry dimwits to proclaim Andrew Scheer's intention to snatch women's reproductive rights away from them. Scheer's voting record from his career as an MP provides Liberals a treasure trove of pro-life votes, advocacy for pro-life organizations and a penchant for defending the lives of unborn children.

That Andrew Scheer—what a monster!

The Butts Liberals and CBC will dig up every piece of evidence they can to whip Canadian women—particularly the teens who post habitual selfies with duck lips—into a hysterical frenzy about evil Scheer's plan to make abstinence the most reliable form of birth control. They won't just think of Scheer as a party pooper, they will think of him as Nazi.

Immediately following their narcissistic Instagram and Snapchat selfies which are meant to attract lustful eyes, Canada's young twenty-something women will be signing up for the Liberal Party in droves to avert a reproductive, gender holocaust. Gerald Butts is counting on it. Do not expect anything less than a highly exaggerated, misconstrued onslaught against Scheer's woman-hating, Conservative Nazi Party.

The Earth Is Melting

Nevermind China and India—two of the planet's largest carbon emitters. Canada should tax itself out of business and out of competition with these two countries and the United States, Liberals will say. Canadians should pay more to help reduce the enormous smog cloud that perpetually hangs above China, Catherine McKenna will say.

Forest fires and hurricanes—god forbid there are any more between now and October 2019—will be caused by climate change, no matter how small or historically insignificant they really are. Every category 5 hurricane will be treated like the first category 5 hurricane in 600 years at the CBC. Every forest fire or cyclical flood will be exaggerated as the worst, most unprecedented weather event of the Century.

If Scheer and his Conservatives are elected, the Earth will surely explode.

While Trudeau and his puppeteer muster up divison between cis men and their ver, xyr and per counterparts, the CBC and Liberal strategists will be accusing Scheer and his Conservatives of white supremacy, transphobia, misogyny, xenophobia, Islamophobia, anthropophobia, metathesiophobia and homophobia. Heck, the 2019 election may even produce a whole new phobia to be thrown around like a pillow at a slumber party.

Scheer's tax policies will threaten the lives of transgenders across Canada, Butts will say. Scheer's xenophobia and Trumpian antics will plunge Canada into darkness and Islamophobic hillbillies from Alberta will begin cannabalizing the first-born children of every cuck East of Manitoba. The only way to save Canada from these gun-loving freakshows will be to vote Liberal, Butts will say.

This will be 2019 and everything that happens up until election night will resemble nothing short of satirical comedy.

Remind Canadians about Peoplekind in 2019, buy this shirt: 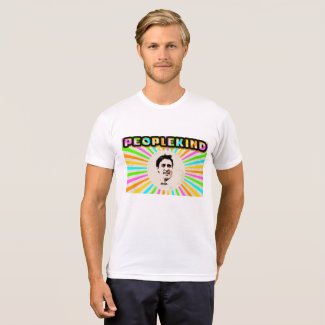